The Catholic Defender: Season of the Mistletoe

Every year when Christmas time comes around, people who are on the side of Scrooge come out opposing the spirit of Christmas because they want to say that it began through Pagan foundations, maybe they reject Christ, or maybe they are in some kind of cult group. I have defended Christmas many times showing that Jesus was really, truly born on December 25, 2 B.C.

I have written on the Twelve Days of Christmas, Candy canes, Caroling, Midnight Mass, as well as other topics related to the Christmas season, but for the Scrooges of the world, they think Christmas is a gotcha moment against the Catholic Church.

Jesus sent the Catholic Church to go to all the world with what He proclaimed to them. Jesus is the way, the truth and the life, what a grace it is to bear this foundation in our lives. In accomplishing this Mission, the Church has used traditions from culture, customs, language, and the environment to reach the nations. Sometimes roots did come from Paganism that the Church used to Christianize societies.

If St. Paul were here today, what would he say about all this, especially some of the traditions that are not based from the bible?

Consider the following coming from Acts 17:16-28 as he was speaking with Greek Philosophers:

"Now while Paul was waiting for them at Athens, his spirit was provoked within him as he saw that the city was full of idols. So he argued in the synagogue with the Jews and the devout persons, and in the market place every day with those who chanced to be there. Some also of the Epicurean and Stoic philosophers met him. And some said, “What would this babbler say?” Others said, “He seems to be a preacher of foreign divinities”–because he preached Jesus and the resurrection. And they took hold of him and brought him to the Are-opagus, saying, “May we know what this new teaching is which you present? For you bring some strange things to our ears; we wish to know therefore what these things mean.” Now all the Athenians and the foreigners who lived there spent their time in nothing except telling or hearing something new.

So Paul, standing in the middle of the Are-opagus, said: “Men of Athens, I perceive that in every way you are very religious. For as I passed along, and observed the objects of your worship, I found also an altar with this inscription, ‘To an unknown god.’ What therefore you worship as unknown, this I proclaim to you. The God who made the world and everything in it, being Lord of heaven and earth, does not live in shrines made by man, nor is he served by human hands, as though he needed anything, since he himself gives to all men life and breath and everything. And he made from one every nation of men to live on all the face of the earth, having determined allotted periods and the boundaries of their habitation, that they should seek God, in the hope that they might feel after him and find him. Yet he is not far from each one of us, for ‘In him we live and move and have our being’; as even some of your poets have said, ‘For we are indeed his offspring." 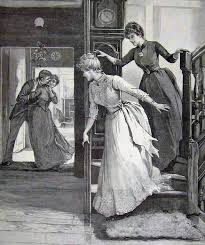 Where does the tradition of the mistletoe come from? Do you have anyone you would like to find under a mistletoe?

I have always wondered where the tradition of the mistletoe had derived from. I have seen it on television during the Christmas season and I was just curious to where this tradition comes from.

This particular custom is one that I have not experienced as I never have walked under the mistletoe.

Though I am so thankful for my wife, Gigi, I am glad that I do not have to depend on a mistletoe. So, if you happen to go to one of those office parties at work or someplace, you better be careful for those looking to capture you under a mistletoe. You never know these days who might be looking for the opportunity to kiss you!

The "Mistletoe" over several centuries, is scene as a Christmas decoration. There are basically two types of mistletoe, which is native to North America. The Phoradendron Flavescens lives as a parasite on trees mostly known in the West, but there are some known to grow in New Jersey spreading down south to Florida. But mistletoe is also capable for growing on its own; like other plants it can produce its own food by photosynthesis.

The other mistletoe, called the Viscum Album which is of European origin. The European mistletoe is a green shrub with small, yellow flowers and white, sticky berries which are considered poisonous.

It's commonly seen on apple but only rarely on oak trees. The rarer oak mistletoe was greatly venerated by the ancient Celts and Germans and used as a ceremonial plant by early Europeans.

The Greeks and earlier peoples thought that it had mystical powers and down through the centuries it became associated with many folklore customs.

The Plant : Mistletoe is especially interesting botanically because it is a partial parasite (a “hemiparasite”). As a parasitic plant, it grows on the branches or trunk of a tree and actually sends out roots that penetrate into the tree and take up nutrients.

Mistletoe is a plant that grows on range of trees including willow, apple and oak trees.

The tradition of hanging it in the house goes back to the times of the ancient Druids. It is supposed to possess mystical powers which bring good luck to the household and wards off evil spirits. It was also used as a sign of love and friendship in Norse mythology and that's where the custom of kissing under Mistletoe comes from.

When the first Christians came to Western Europe, some tried to ban the use of Mistletoe as a decoration in Churches, but many still continued to use it! York Minster Church in the UK used to hold a special Mistletoe Service in the winter, where wrong doers in the city of York could come and be pardoned.

The custom of kissing under Mistletoe comes from England. The original custom was that a berry was picked from the sprig of Mistletoe before the person could be kissed and when all the berries had gone, there could be no more kissing!

The name mistletoe comes from two Anglo Saxon words 'Mistel' (which means dung) and 'tan' (which means) twig or stick! So you could translate Mistletoe as 'poo on a stick'!!! Not exactly romantic is it!

Mistletoe was also hung on the old English decoration the Kissing Bough.

At Christmas time a young lady standing under a ball of mistletoe, brightly trimmed with evergreens, ribbons, and ornaments, cannot refuse to be kissed. Such a kiss could mean deep romance or lasting friendship and goodwill.

If the girl remained unkissed, she cannot expect not to marry the following year. In some parts of England the Christmas mistletoe is burned on the twelfth night lest all the boys and girls who have kissed under it never marry.

Whether we believe it or not, it always makes for fun and frolic at Christmas celebrations. Even if the pagan significance has been long forgotten, the custom of exchanging a kiss under the mistletoe can still be found in many European countries as well as in Canada.

Thus if a couple in love exchanges a kiss under the mistletoe, it is interpreted as a promise to marry, as well as a prediction of happiness and long life. In France, the custom linked to mistletoe was reserved for New Year’s Day : “Au gui l’An neuf” (Mistletoe for the New Year).

Today, kisses can be exchanged under the mistletoe any time during the holiday season. The Legend : For its supposedly mystical power mistletoe has long been at the center of many folklore.

One is associated with the goddess Frigga. The story goes that Mistletoe was the sacred plant of Frigga, goddess of love and the mother of Balder, the god of the summer sun.

Balder had a dream of death which greatly alarmed his mother, for should he die, all life on earth would end. In an attempt to keep this from happening, Frigga went at once to air, fire, water, earth, and every animal and plant seeking a promise that no harm would come to her son.

Balder now could not be hurt by anything on earth or under the earth. But Balder had one enemy, Loki, god of evil and he knew of one plant that Frigga had overlooked in her quest to keep her son safe. It grew neither on the earth nor under the earth, but on apple and oak trees. It was lowly mistletoe. So Loki made an arrow tip of the mistletoe, gave to the blind god of winter, Hoder, who shot it , striking Balder dead.

The sky paled and all things in earth and heaven wept for the sun god. For three days each element tried to bring Balder back to life. He was finally restored by Frigga, the goddess and his mother. It is said the tears she shed for her son turned into the pearly white berries on the mistletoe plant and in her joy Frigga kissed everyone who passed beneath the tree on which it grew.

The story ends with a decree that who should ever stand under the humble mistletoe, no harm should befall them, only a kiss, a token of love.”

What the Church has done like it has on other traditions, customs, and culture is to put a Christian meaning to it.

What could be more natural than to translate the spirit of this old myth into a Christian way of thinking and accept the mistletoe as the emblem of that Love which conquers Death? Its medicinal properties, whether real or imaginary, make it a just emblematic of that Tree of Life, the leaves of which are for the healing of the nations thus paralleling it to the Virgin Birth of Christ.

Taking a cultural tradition and giving it a Christian purpose is not a bad thing, consider Christian Contemporary Music, I’ve heard it argued that it is wrong because it is like that of the world. I would argue that music can be used as a tool to reach out to the world with the truths of the Church.

There are many things associated with Christmas that can be used for fun and teaching good ways to spread Christmas cheer. So as St. Paul would say to his listeners, “Greet one another with a holy kiss. All the churches of Christ greet you. I appeal to you, brethren, to take note of those who create dissensions and difficulties, in opposition to the doctrine which you have been taught; avoid them.” Romans 16:16-17